[Continued from May 2013 issue. In the previous article, I shared my observations about Swamiji’s ways: “The ways of a Jeevanmukta”; and then my pursuit of “Transcending likes and dislikes” in the association of Swamiji. The subject matter of this article is the social milieu that determines a Mahātmā’s birth, and Swamiji’s unique role in the broad canvas of Loka-sa´graha in our country.]

The Genesis of a Mahātmā

Variety and changefulness are fundamental to Creation. Nature’s grandeur lies in fullest expression of its variety. But the ever-changing universe with its unimaginable diversity remains woven into a beautiful harmony only because of the one unchanging substratum. Ancient Rishis of India discovered this truth, and in this discovery they found the panacea for all the evils of human society. Because, they found that this one unchanging reality is nothing but our own real identity. And, the ignorance about this identity is the root cause of all our troubles.

Human societies are periodically led to degeneration and decay because of the divisive forces originating from selfishness, competition, and intolerance of the individual minds. India, being a land of amazing variety, the scope for such degeneration and strife has always been high. Then, how is it that such an ancient civilization living with all kinds of diversity, and repeatedly attacked and ruled by diverse people from outside, is still thriving on earth?

The spiritual thinkers of India realized that the only way to sustain the civilization on the auspicious path, was to keep people anchored to the one reality, their own inmost Self. They never discouraged diversity. Rather, they encouraged it through all forms of art, culture, spiritual practices, religious rituals and ceremonies – but ensuring that all diverse expressions and practices remained firmly rooted in their essential oneness.

The diversity was not meant to divide people; it was to unite them by highlighting their innate oneness. The entire spiritual literature and all branches of classical Indian culture are based on this truth of Unity in diversity – that the infinite variety is essentially an expression of the same one all-pervading reality. The civilization blossomed with all possible varieties, nevertheless remaining harmoniously woven to the fundamental oneness.

Why am I discussing it here in the present context? Because, when we look into the social, religious, and spiritual history of India, we find that the arrival of the great spiritual personalities in each era has been to revive and reinforce this fundamental note in the society. The only mission of Mahātmās or Maharshis – the Knowers with great social dimension – has been loka-saṅgraha (defined as “lokasya unmārga-pravṛtti-nivāraṇam”), which means: A society, because of the inherent selfish tendencies of people, will naturally move towards decadence and disintegration; a Mahātmā’s role is to strive to arrest this “tendency to go astray” (unmārga-pravṛtti) by reinstituting the eternal values in people.

Whenever the country had been passing through a dark phase of ignorance and inertia, whenever greed for material possession and over-indulgence in sensory pleasure threatened to disintegrate the society, whenever religious practices and rituals became stale ostentation, and socio-political bigotry overpowered the lofty universal values, great spiritual personalities arrived to revitalize the society with pristine spiritual power.

As in the ocean, big waves are caused by big depression, in the society too a dark period gives rise to the birth of great spiritual reformists. If we look into their life and the prevailing condition in the society, however different their life and exploits may appear to be, their arrival in every era in any part of our land has been essentially for the same purpose. Empowered by the unlimited power of their realization of the Reality within, they generated tremendous purifying and unifying force in the society.

Krishna had the mission of establishing righteous rule by eliminating corruption and corrupt rulers proliferating in Indian subcontinent. He presented Bhagavadgeetā reinterpreting the Upanishads, making the Upanishadic goal attainable by seekers engaged in any field of activity. Śhaṅkarāchārya came to re-establish the supremacy of Vedanta and Sannyāsa by removing rigid ritualistic overindulgence and perversion. Chaitanya Mahaprabhu flooded the fragmented society with the message of Divine love and unity; he led an overwhelming mass-movement powered by nāma-saṅkeertana.

When Indian society under Western influence was undermining Hindu religion, Sri Ramakrishna Deva stormed in to reinstitute faith in Hindu ways of worship, and rejuvenate and unify the practices of all religions. He brought to us the freshness of straightforward knowledge and intense devotion. Swami Vivekananda revolutionized the vision of Western philosophers and scholars through rational exposition of our scriptural knowledge, and awakened them to the universality of Hindu religion. He strove to shake the Indians out of their inertia and self-condemnation, and unified the fragmented society on the basis of its real cultural treasure and unity. Sri Aurobindo restored spirituality from the tendency of keeping away from life to the pursuit of divinizing life.

In essence, what all of them did was to awaken people to their inmost power, and thereby revitalize and integrate the society on the basis of our innate oneness.

From external God to our own Mind

When we look into Swamiji’s lokasaṅgraha over the past fifty-seven years, the most striking note in his mission seems to be his untiring multi-pronged effort to shift the focus from external God to the seeker’s own mind; in making people understand that the real purpose of all religious as well as spiritual practices is to transform the practitioner’s personality.

By keeping God in the heavens and complacently expecting something to come from the blue, we make devotion stale 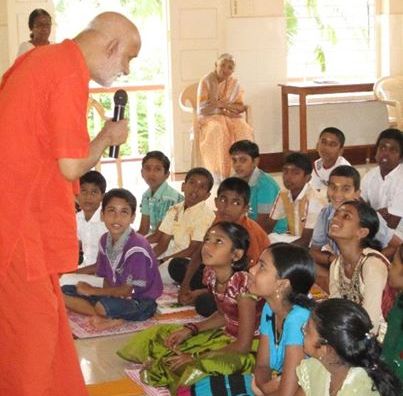 and stagnant, and miss the benefits it is meant to deliver. In this era of rationality, even time-tested religious disciplines are becoming obsolete because people are not aware of the real purpose and benefits of such disciplines.

Generally, a social reformer will discard the practices that have become alienated from the contemporary thinking. But a Maharshi’s role is not to discard the practices that are based on eternal truth, but to rekindle them with fresh vision that connects them to eternal needs of human mind. By that, not only the eternal value of the disciplines is re-established, but more importantly, the society is saved from massive psychological and moral degeneration.

Swamiji explains that while chanting “Viṣṅu-sahasranāma” we are not worshiping some unknown God residing in the yonder sky, but these thousand names of Viṣṇuḥ depict thousand qualities of the human personality, which anybody would covet. And the qualities can be imbibed by “spending mind-hours” on their contemplation. For example, the first word “Viśvam” means the whole Universe, and the 2nd word “Viṣṇuḥ” means the all-pervading reality or consciousness, which is the source of the Universe as well as our real identity. By contemplating on just these two words, will not our mind expand? Will it not be freed of constrictions and stress of all kinds?

Not only that, even if we do not understand the meaning of the words, the very act of chanting fervently every day in the early morning hours, being attentive to proper pronunciation, rhythm and accent, will energize as well as discipline the body, mind, speech, and breath so much that the efficacy of the practice will become a first hand experience. The students will no more complain about lack of concentration. Managers and Administrators will relish their own attention and comprehensive understanding of situations.

It is not for nothing that more than five thousand years ago, Bheeshma the great had valued the chanting of “Viṣṅu-sahasranāma” even more than the performance of “Aśvamedha Yāga” by the Kings of that era. It is not a trifle that this practice has survived the test of time. When followed by large number of people, this single pursuit will make the society disciplined, energetic, and prosperous – both materially and spiritually. Attentive and responsible children with sharp and subtle intelligence will be born in the society.

Swamiji has been exhorting devotees to question their devotion if by decades of worship they had not come closer to God, or God had not come closer to them. “God is a concept of the human mind. All the deities are innovations of the human mind. The temples are erected by human beings. The idol is carved out of stone or wood or metals by human beings. Even the infusion of ‘life’ as well as special spiritual powers into the deity through the consecration ceremonies, is done by the humans (that is why the chief priest is considered to be the father of the deity). All the rituals and methods of worship are also devised by the humans for serving human purposes. …

“We take food for our nourishment, the food does not get nourished! The worship is for us to evolve; God does not grow richer by our worship! In doing everything else you are analyzing whether you have got the desired result or not; then why only in the case of worshipping God you never care to think what has been the outcome of your decades-long worship?”

The central theme of Swamiji’s powerful expositions over this long period of his Sannyāsa life has been to hammer into the seekers’ minds: that the focus of Bhakti-yoga is not God but the devotee’s own mind and behaviour, which have to be embellished with devotional qualities; that the meaning of Karma-yoga is not getting engaged in more and more activities but cultivating Samatva, the yogic orientation of the mind; and the purpose of Jñāna-yoga is not just to gain knowledge but to pursue self-purification and self-transformation through contemplation on the Truth.

In essence, it means shifting the focus from outside to one’s own within. Not only for religious or spiritual pursuit, even to deal with any behavioural or interactional problem in life, Swamiji’s lifelong effort has been to make people shift their attention from the external situation to the mind’s response to it. We must appreciate that everything in life starts from our mind, is sustained by our mind, and the final outcome is also in our mind. This constant awareness of the mind and effecting transformation of the mind through every interaction in life, is Swamiji’s “Interactional Sādhanā”, which converts every moment, every thought, and every action of our life into spiritual sādhanā.