[Poojya Swamiji’s 80th Jayanti falls on May 13. Also, in April the Ashram completed 50 years. While we are contemplating on a commemoration volume covering various aspects of Poojya Swamiji’s life and mission, I thought some reminiscences of the great association should appear in the May issue of Vichārasethu. – Swami Nirviseshananda Tirtha]

The ways of a Jeevanmukta

We were on the Pāndavagiri hilltop. The ancient Devi Temple was in pathetic state. Some portions were almost falling apart. Even the hilltop was full of huge stony structures exposed by constant erosion of the intermediate earth. As such, the hill was very steep with very little ground on top. There was hardly any space for even fifty people to stand or go around the Temple. 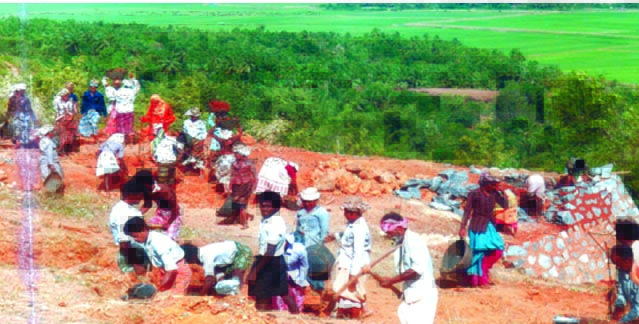 Swamiji was thinking of rebuilding the Temple after creating a broad flat rectangular lawn on the hilltop by reshaping the hill. That is, by bringing earth from the bottom to level the slope at the top. Also by cutting the stones from wherever they were protruding. Earthmovers were not so common those days, and the machine did not seem to be a fit solution because of the fine balance required in cutting, carrying, kneading, and dumping earth wherever necessary without causing any damage to the sanctum sanctorum of the Temple. The random rubble retention also had to progress along with the earth filling.

The proposal seemed to me somewhat crazy, and absolutely impossible considering our resources. As such I did not like the idea of changing the natural contour to create a flat ground on top to allow large gathering of people and their festivals. I thought, the irregular lonely surroundings of the Temple would be more attractive for a devotee to sit there in the morning or evening. At that time, I did not have any idea about the societal role a Temple as an institution can play, particularly in villages. The enlightenment dawned only through Swamiji’s association, by accompanying him and participating in various temple-programmes and religio-social movements.

We had taken Kuttan (Swamiji’s trusted traditional carpenter) with us to take some measurements, so as to have a realistic idea of the project. We tied two long poles to have a very long horizontal line from which we could hang a stone with a rope to measure the slope of the hill and the amount of earth filling/cutting needed at different points. The final slope had to be decided on the basis of lawn-dimensions required on top as prescribed by the temple-¿¡stras. It appeared that the final retention wall at most places would be extremely steep, violating normal engineering codes.

As we were taking the measurements at the most difficult point, I remarked: “Swamiji, I would have considered our task to be absolutely impossible. But then, the thought came to my mind that as Rama did the setu-bandhana, it may also be possible for you with the help of a large number of villagers!”

Very soon started the project that continued for six years. For the stones, we had to use machine drilling and mild explosives.Rest of the work was done manually. Swamiji himself was constantly involved in kneading the earth well, so that it would have high retention strength. The execution became harder because of Swamiji’s vow that we would neither bring in 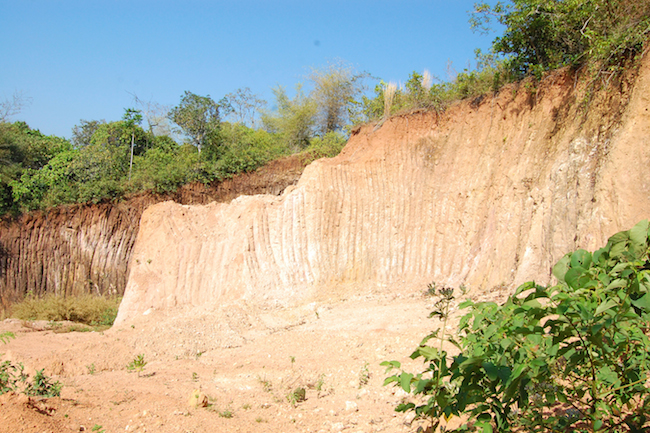 earth from outside nor transport it to anywhere else. Those were days when many of the hills were being cut mercilessly by the soil-mafia, and very soon we were to petition the Kerala High Court against such illegal soil transfer.

Regarding the resources for such a gigantic project, Swamiji told me right at the beginning: “See, to plan for eight when you have ten in hand is the householder-way. A Sanny¡sin plans for fifteen, even when he has nothing in hand. And as he proceeds with the work, the budget may increase to twenty-five also. His strength lies in not doing anything for personal gain or desire; he is motivated by the need of the society. He does not get disappointed even if the work remains unfinished.”

Seeing Swamiji coursing through various difficult periods of the task, and toiling with about one hundred labourers from morning to evening every day, I often remembered Rabindranath Tagore’s song about the great Souls (Kon alote praaner pradeep jaaleeye tumi dharai aasho …):

“Lighting the lamp of life from which eternal Flame
Do you arrive on earth,
O the great visionary, the lover, the dedicated one? …
Who is that Mother whose smiling face you see,
And smile in the midst of grave danger?
Who knows, seeking What you roam about –
Setting fire to all worldly comfort and happiness! …
O you have no anxiety at all –
I wonder, Who must be your companion!
What is that infinite Ocean of life,
In which you float blissfully, forgetting death?”
(Translated from Bengali Gitanjali)

Not only during the Temple reconstruction, this I have been thinking throughout the past twenty-five years, seeing Swamiji work tirelessly without the least desire or disappointment. The association, especially during the healthier days when I could assist Swamiji in every aspect of his loka-sangraha, had been a field-training for me to learn how a Knower acts and interacts, how one has to transcend the likes and dislikes to act naturally without being motivated by desires.

In fact, it started during our second visit to the Ashram, a few months before we renounced and joined the Ashram. One evening we found Swamiji speaking fervently (almost angrily) to a group of young arrogant villagers, who were involved in some grave immoral act. He was standing in the verandah and the boys were outside. Seeing the intensity of his voice and gestures, we felt quite concerned – those days, we did not understand Malayalam. Swamiji could feel my mind. He suddenly walked towards me and whispered: “Don’t worry; I am only trying to put some sense in them. I have called them here for that purpose.” Immediately he went back to them and continued vociferously.

The event may appear to be simple, but it opened a new horizon before me. I thought: “Will I ever deliberately face these people? Any peace-loving person would rather try to avoid such encounter than to call it upon himself willfully. Then how is it that a Saintly person like Swamiji had called these boys and was speaking to them ‘angrily’? Normally, anybody would be hesitant and even fearful imagining the possible response! And, according to usual belief, should not a Saint always speak with visible peace and love?”

That was the time we were contemplating on renouncing profession and home to join the Ashram and serve Swamiji and Mataji Sulabha Devi. This event laid open the next phase of saadhana before me. I had done enough of meditation, and studied the scriptures with enough dedication. It became clear to me that the saadhana after coming to the Ashram would be to transcend the likes and dislikes. I knew that service to the Guru gives the best opportunity for this. But I did not know how difficult it would be in practice!

A few days later, after dinner, as Swamiji was resting on his recliner, we were sitting at his feet. I raised the point of my new enlightenment about the sādhana of transcending likes and dislikes. He said, “Good things will be liked. Bad things will be disliked. But, you must not run after what you like, and hate or avoid what you dislike.”

“People think that a Knower should not have sukha-duḥkhas. If sukha-duḥkhas are not there for him, then where is the question of having samatva – remaining equal or even-minded – in sukha-duḥkhas?” After a while he said, “You know, it is like swimming in water. If there is no drowning power of water, will there be any joy in swimming? Will not swimming become meaningless? To swim, you must learn the art of remaining afloat by neutralizing the drowning power of water.”

Again, it opened up a new horizon before me. The "interactional sādhanā" (the term was coined years later) was coming to life. That night, I wrote about this enlightenment with tears of gratitude soaking the pages of my diary. Long back, I had asked a Mahātmā: “Will not the Jñāni have sorrows?” He had smiled and replied: “Yes my son, certainly he has, but he does not identify himself with them.” The illustration of swimming introduced me to a new dimension of a Knower who remains tremendously active in the world never getting overwhelmed or tainted by worldliness. It is not keeping away from the waves, but floating joyfully over the waves.

But, the test of knowledge was not that easy. Soon after we joined the Ashram, Swamiji told me one day: “For quite some time we have not taken up any construction. Nobody was here. Now that you have come, I would like to take up some construction.”

It was a shock! If anything on earth I disliked, it was construction. How did Swamiji know about it? Or, is it the inscrutable way of Mother Nature?